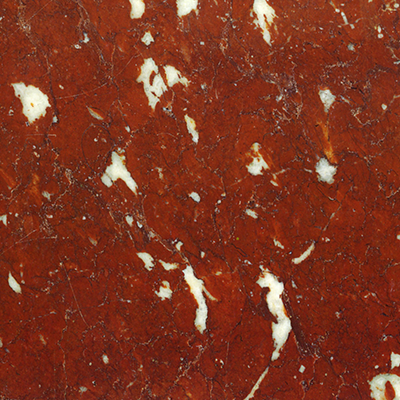 This historical marble has been widely used for mantels. Three of the nine mantels from the sixteenth century Château de Cadillac in Gironde have Red Languedoc marble elements. The columns of the antique mantel in the Salon de Condé in the Chateau de Chantilly were carved out of this beautiful marble. Finally, the beautiful Louis XIV style mantel in the Cabinet of Sully in the Library of the Arsenal in Paris ia also made out of this marble.

Known since ancient times, Red Languedoc marble is quarried today in several towns in the Languedoc-Roussillon region - the most important and oldest of them being Caunes-Minervois (Aude) and Felines (Hérault). Red Languedoc varies from orange-red to bright red with large white veining. Raban Maur describes it as "mixed froth and blood”. It is mainly used for architecture, wall lining, fireplaces, furniture and inlay work.

This marble has been extracted as early on as Roman times, in towns located on the southern side of the Black Mountain. But extraction was relatively slow until the late Renaissance period. The turnaround happened in the early seventeenth century. In 1615, Abbot Jean d'Alibert met the sculptor Stefano Sormano from Rome and assigned him the task of exploring the marble quarries located on the land of the abbey of Caunes. Given the size of Sormano’s discovery, it became possible to send blocks of marble to Italy where the stone was a huge success, known as “Rosso di Francia.” Architects Giovanni and Battista Orsolino used it to decorate the church Nostra Signora delle Vigne in Genoa, built in 1620. In 1624, the choir doors of the chapel of the Conception in Bastia were decorated with Red Languedoc marble.

The quarrying activity was soon after dominated by the Italians and the production was mainly sent to Italy. The Italian monopoly on the Caunes quarries did not prevent the development of other sites in the region. Roquebrun quarry in Herault was opened in 1622 thanks to quarry men from Beziers. In 1658, Jean Baux a French marble mason arrived in Caunes. He introduced Red Languedoc marble into the French market, providing marble for the choir screen of the church of St. Mary in Auch and the altarpiece of the Cathedral of Toulouse. The use of Red Languedoc marble in the Toulouse region is also due to the influence of sculptor Gervais Drouet, a well known disciple of Bernini, who had a particular taste for it. In 1662, the contract for the altarpiece of the Cathedral of Toulouse stipulated “veined marbles of different colors” on pedestals of stone, that were made by Gervais Drouet in crimson red mixed with gray and black and white striped Petit Antique. Subsequently, the quarries became royal by decree in 1692, and were directly operated by the Batiments du Roi (or the King's Buildings). Named the “King’s Quarry” during the reign of Louis XIV, it was extensively used in the Palaces of Versailles and Saint-Cloud and many other royal buildings. Red Languedoc was also used for the construction of the Petit Trianon in Versailles by Jacques-Ange Gabriel. Later, this marble was used extensively for all types of construction in France, Europe and even the United States.

There are several other quarries of Red Languedoc marble. Among them, the quarry of Notre-Dame-du-Cros was in use until the late twentieth century. The marble extracted from another nearby quarry Saint-Nazaire-de-Ladareze in the department of Herault is called “Incarnat Red”. This site is still in operation. Incarnat marble is also found further south, in Villefranche-de-Conflent, in this case it is named “Villefranche Incarnat”. However this quarry has been closed for many years. Other historical quarries are the l’Hôpital, Portes and Ales.

Currently, there are three quarries in operation, two operated by an Italian company.