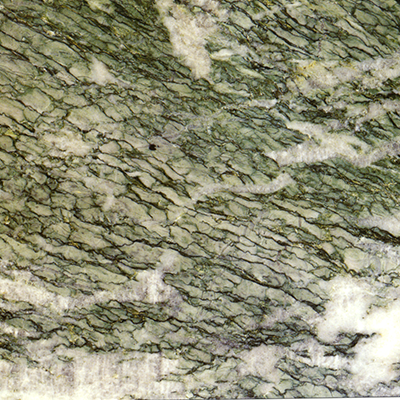 Two varieties of Campan marble are available to make your custom-made mantel, the Grand Mélange variety and the Green one.
The large mantel in the small dining room of the Napoleon III apartments in the Louvre museum was made of Grand Mélange Campan marble by Simouillard, around 1860. It is quite similar in design to the custom-made "Ducs de Nantes" mantel we offer.
The Hotel Lambert also retains a Louis XV style mantel, made of Campan marble, in the Salon of Spain. Our custom-made "Prince de Soubise" mantel is very similar to the one in the Hotel Lambert.
A more ancient use of this marble can be seen in the nine mantels in the sixteenth century Château de Cadillac in Gironde that have Campan marble elements.

The Grand Mélange Campan quarry is located in a place called Espiadet on the plateau of Payolle, in the district of Sainte-Marie-de-Campan (Hautes-Pyrénées). It was opened in ancient times, exploited throughout the Middle Ages, temporarily closed and reopened in the sixteenth century (D. Bertin, circa 1550). In 1692, it was decreed a "Royal quarry" exclusively providing for the construction works of Louis XIV. Exploited until the twentieth century, the quarry is currently closed.

The marbles of the Campan valley, in the Hautes-Pyrenees, are very famous. They have all sorts of color combinations, but with their nodular structure they are immediately recognizable. The quarries have been exploited since the first century BC by the Romans. There are several quarries, including Pont de la Taule, but the best known one is the valley of Campan.
These marbles were exclusively reserved for the use of King Louis XIV. They were extensively used for the interior decoration of the Palace of Versailles and other royal buildings. Campan marble was also used to decorate furniture; the eighteenth and nineteenth centuries saw widespread use of these marbles.

The green variety is known in France as the Green or Cherry Green Campan. This marble was also called “Verd Verd” in the seventeenth century or “Cippolino Mandolato”, a place in Italy where it was imported from the second century. The green variety was particularly very popular for interior wall-lining during the late nineteenth and early twentieth centuries. Fine examples of its use in England can be seen in the cathedrals of Westminster, Peterborough and Bristol. The Green Campan was also used extensively for furniture, decorations and fireplaces.
This marble can be admired in the Trianon, in the Hercules Room, the Peace Room or the Hall of Mirrors in the Palace of Versailles.